Iran, May 12, 2020—Over 41,000 people have died of the novel coronavirus in 317 cities checkered across all of Iran’s 31 provinces, according to reports tallied by the Iranian opposition People’s Mojahedin Organization of Iran (PMOI/MEK) as of Tuesday afternoon local time, May 12. The official death count declared by the regime is 6,733, less than a seventh of the actual figure.

According to reports from physicians, more than 130 COVID-19 patients have died in Tehran’s Shohadaye Gonmam Hospital alone and more than 100 such patients in the Iranian capital’s Zia’ian Hospital.

Mass Infection of Inmates Renews Questions About Abuse and Neglect in Iranian Prisons #Iranian regime’s President Hassan Rouhani acknowledged that in one Iranian prison, 100 out of 120 inmates became infected with #COVIDー19 #coronavirus https://www.ncr-iran.org/en/news/mass-infection-of-inmates-renews-questions-about-abuse-and-neglect-in-iranian-prisons/#.XrqF60A0TLY.twitter …

On Saturday, Iranian regime’s President Hassan Rouhani acknowledged that in one Iranian prison, 100 out of 120 inmates became infected with Covid-19

55 people are talking about this

“The rising trend or the start of a peak is witnessed in eight provinces, including Lorestan, Mazandaran, Khuzestan, Kerman, Markazi (Central), Kohgiluyeh & Boyer Ahmed, Ilam and Hamedan,” according to a report wired on Tuesday, May 12, by the state-run ISNA news agency citing the regime’s Health Ministry Epidemiology Committee.

According to the state-run Etemad daily on Tuesday, in Ahvaz, director of the city’s Health Council said, “We have over 1,800 people searching the trash for something to sell that do not use gloves or other protective gear. These individuals pose a grave danger to themselves, their families, and others in transferring the novel coronavirus. Can’t the EIKO and Mostazafan Foundation cover these individuals at least for a short period until the illness is contained?” The official is referring to two institutions controlled by Iranian regime Supreme Leader Ali Khamenei that control tens of billions of dollars in assets and do not pay any taxes.

“There has been a significant increase in coronavirus cases across [Fars] province,” according to a report wired by the state-run Mehr news agency on Tuesday citing the deputy dean of the Kerman Medical Sciences University in south-central Iran.

Analysis by PMOI/MEK Iran, May 11, 2020—The Iranian regime has presented its own people and the international community with multitudes of propaganda about its national economy. Viewed as a whole,…

“The number of COVID-19 patients in North Khorasan Province has been increasing for the past few days and the average number of deaths is higher than the country’s average stats,” said Hadi Ghavami, a member of the regime’s Majlis (parliament), on Monday according to the state-run outlet Radio Farhang.

The state-run Jahane San’at daily wrote on Tuesday, “With each passing day they are announcing a lower number of coronavirus deaths to portray normal circumstances for the people. In many cities they are no longer taking COVID-19 patients to hospitals. They refuse to provide medical treatment for so long that the patient dies and is directly taken to a cemetery.”

Amir Khojasteh, a member of the Majlis (parliament), said, “Today, our county is dealing with two viruses: the coronavirus and the virus of economic mismanagement… which combined with unbridled inflation has made living so difficult for the people that the consequences of coronavirus pale in comparison… The president says that he has dismissed the trade minister because of his lack of control over the automobile industry. Who will you dismiss for the 100-percent increase in the price of housing and home appliances, the 30-to-100-percent increase of food and clothing prices, and the lack of increase in the wages of workers, government employees, and pensioners?”

Javad Hosseini Kia, another MP, said, “During the coronavirus outbreak, the inefficiency of the old and worn government became evident to everyone. The government imposed all the costs on the people and the support it promised never materialized.”

Regarding the increasing death toll of coronavirus victims in Iran, Mrs. Maryam Rajavi, president-elect of the National Council of Resistance of Iran (NCRI), said that all of the promises the mullahs made to the people turned out to be hollow and without value. The only way to end poverty and unemployment is to put an end to the tyrannical rule of the mullahs and to establish democracy and the rule of the people in Iran.

Mrs. Rajavi added that Rouhani’s sudden dismissal of the trade minister is a sign of the escalation of inner turmoil within the regime during the coronavirus outbreak. Corruption, repression, and terrorism is the nature of this regime.

Meanwhile, Mrs. Rajavi paid homage to all the nurses and physicians who lost their lives to provide care to coronavirus patients. “They risk their own lives while their basic rights have been trampled for years under the mullahs’ rule. All of us feel indebted to these selfless women & men,” she said.

We commemorate the physicians and nurses who lost their lives to provide care to the #Coronavirus patients.They risk their own lives while their basic rights have been trampled for years under the mullahs’ rule.All of us feel indebted to these selfless women & men #IND2020 #Iran 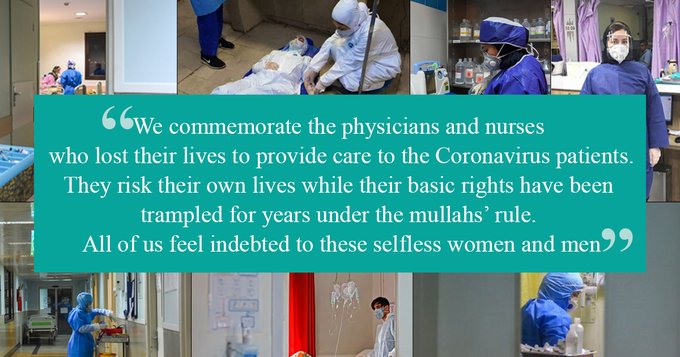 Absent relief efforts, the flood-stricken people of Sistan and Baluchestan continue to suffer