Iran, April 3, 2020—Juvenile offender Danial Zeinolabedini, 19, was tortured to death by prison guards in Miandoab, western Iran. His dead body was handed to his family on Thursday, April 2. Zeinolabedini contacted his family at 1 am local time, Tuesday, March 31, transferred from Mahabad Prison, western Iran, and said he wad been transferred to that prison and nearly beaten to death. He was begging his family to come and save him.

Following a riot in Mahabad Prison on Sunday, March 29, Zeinolabedini and a number of other inmates were transferred to solitary confinement under the pretext of being involved in launching the riot and protests. After suffering a severe beating by Mahabad Prison authorities, Zeinolabedini was exiled to Miandoab and once again placed under torture. His family was contacted on Thursday, April 2, and informed of his death. Signs of beatings and torture are clearly seen on Zeinolabedini’s dead body.

Juenile offender Danial Zeinolabedini, 19, was tortured to death by prison guards in Miandoab, western #Iran. His dead body was handed to his family on Thursday, April 2.#HumanRights 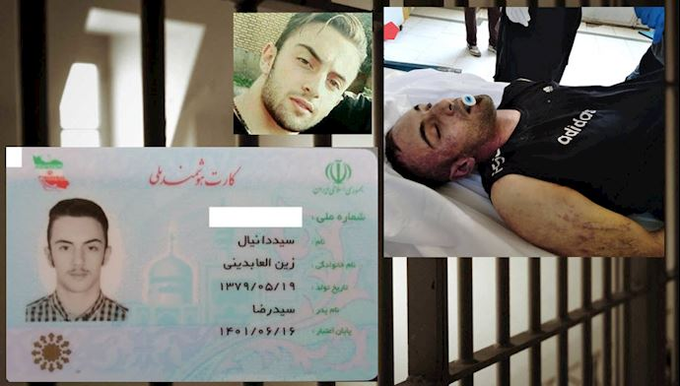 One of the relatives of Zeinolabedini said after he contacted the family, “The roads were closed due to the ongoing coronavirus outbreak. As a result, the family was unable to go to Miandoab. They were contacted at 9 am local time on Thursday, April 2, from Miandoab Prison and told to come and receive his dead body. We took off his clothes and saw that his entire body was bruised. There were stitches on his abdomen. All the while the forensics office had registered the cause of his death as suicide. Danial’s father suffered a heart attack once he saw the scene and is now hospitalized.”

“Danial Zeinolabedini, an 18-year-old imprisoned in Mahabad prison, West Azerbaijan province, is at risk of execution. He was sentenced to death in June 2018 after an unfair trial in which he was convicted of a murder that took place when he was 17 years old. His execution would be a grave violation of international law,” the statement read in part.

Inmates in Mahabad prison located in northwest Iran launched a riot on Saturday, March 28, and many were able to flee the facility. This riot was launched as inmates were protesting regime authorities’ refusal to release prisoners despite the ongoing coronavirus epidemic across the country.

This riot led to clashes between inmates and prison guards and gunfire was heard well into the night.

Reports from Tehran indicate inmates of a ward in the Greater Tehran Prison (Fashafuyeh) launched a riot on Friday, March 27, protesting the spread of COVID-19 in the facility, a number of inmates dying to this illness and many others being infected.

Following this riot, prison guards and special anti-riot units attacked the wards, throwing out the prisoners’ belongings under the pretext of periodic inspections. Authorities have also banned all contact between the prisoners and their family members, and reports indicate the inmates are under intense pressure.

All prison guards and authorities are on full alert and forces stationed at military bases near this facility are also on high alert and ordered to be ready to confront a possible riot.

It is worth noting due to the coronavirus outbreak and a number of inmates being infected in numerous prisons across Iran, the inmates are facing serious threats and their lives are in grave danger. Six prisoners infected with coronavirus have died in the Greater Tehran Prison ever since the COVID-19 crisis began and started spreading throughout the country.

Hygiene conditions in the prison wards are reported as atrocious. Each room has a high number of prisoners cramped inside and many don’t even have a bed to sleep on, forced to lay down and rest on dirty floors.

Despite the coronavirus starting to spread in the Greater Tehran Prison, authorities and officials have to this day remained silent on this subject and refusing to provide any report on the status of ordinary and political prisoners. As a result, the lives of many inmates in this prison are in grave danger.

Prior to this, 45 political prisoners in the Greater Tehran Prison launched a hunger strike protesting being “buried alive” as COVID-19 was spreading in this facility and already had taken the lives of many inmates.

It is worth noting that during the past two weeks five other prisons in the cities of Khorramabad (Parsilon), Aligudarz, Tabriz, Saqqez and Hamedan have launched riots in an effort to save their lives from coronavirus.

In Urmia, women prisoners have launched a hunger strike protesting lack of hygiene supplies and authorities’ refusal to temporarily release them as the virus spreads across the country.

Reports obtained indicate over 200 female prisoners have been on hunger strike since Saturday, March 28. All these inmates refused to take any food at Saturday lunch time, throwing it on the ground and vowing to continue their hunger strike until they are at least temporarily released.

This hunger strike was launched following the death of a female inmate by the name of Fatemeh Alizadeh, 53 from the city of Kermanshah in western Iran, due to COVID-19. Alizadeh’s conditions were described as very dire just one day before her death. Even though the prison’s medical staff were informed about her poor condition, none took any measures to provide medical care for her.

Iranian opposition President Maryam Rajavi, head of the National Council of Resistance of Iran (NCRI), described the death of inmates in the Greater Tehran Prison as a chain reaction in deaths and a horrific crime against humanity by the mullahs’ regime as authorities continue to refuse to release inmates. Madam Rajavi once again called on the international community to intervene immediately for the release of prisoners, especially political prisoners, and prevent the loss of thousands of lives in jails checkered across Iran.

The UN High Commissioner for #HumanRights should immediately urge the regime in #Iran to accept an international delegation to visit the Prison of Tabriz to find out about the fate of prisoners there #COVID19https://www.maryam-rajavi.com/en/item/riot-in-tabriz-prison-guards-open-fire-wound-prisoners …

Demonstrators in Iranian cities protest the shooting down of Ukrainian airliner

Al-Muhandis plotted the killing of Iranian opposition members in Iraq

Iran’s 2019 protests were like an atomic bomb, state-run TV confesses