Iran, February 9, 2020—On the dawn of February 9, 2013, the Iranian regime’s agents in Iraq conducted the first missile attack on Camp Liberty, the second home of the members of the People’s Mojahedin Organization of Iran (PMOI/MEK) located northeast of Baghdad International Airport. A barrage of missiles ordered by the regime’s supreme leader Ali Khamenei resulted in nine killed and 100 injured among the residents of Camp Liberty.

On February 14, 2013, the National Council of Resistance of Iran (NCRI) revealed that the attack was masterminded by a top commander of the Revolutionary Guards (IRGC) Brigadier General Abdolreza Shahlai. Notably, the missile attack on February 9 was the first one of a chain of missile attacks on the PMOI/MEK members in the camp.

After several deadly assaults on PMOI/MEK members in Camp Ashraf, their first home, that resulted in dozens of deaths and many more wounded, the residents of Camp Ashraf were transferred to Camp Liberty under a humanitarian accord signed by the then-U.S. administration, the United Nations Assistance Mission for Iraq (UNAMI), the Iraqi government, and PMOI/MEK representatives. Camp Liberty was supposed to be a Temporary Transit Location (TTL), which would facilitate the transfer of these defenseless PMOI/MEK members from Iraq to safe countries in European countries or North America.

Also, Camp Liberty seemed to be safer than the previous camp, where many members of the PMOI/MEK were killed or injured by Iraqi military forces in addition to the destruction of many facilities by Iraqi armored vehicles. However, members of the principal part of the Iranian opposition were never safe even in a strong compound such as Baghdad International Airport. In a chain of missile attacks on Camp Liberty, which were carried out from February 2013 to July 2016, many PMOI/MEK members were murdered or injured. Meanwhile, many residents still suffer from their injuries in heavy bombardment.

July 4, 2016, marked the last of a series of deadly rocket attacks launched by #Iran‘ian regime operatives in Iraq during the stay of PMOI/MEK members at Camp Liberty near Baghdad.
Here’s some history on those horrendous missile/rocket barrages. 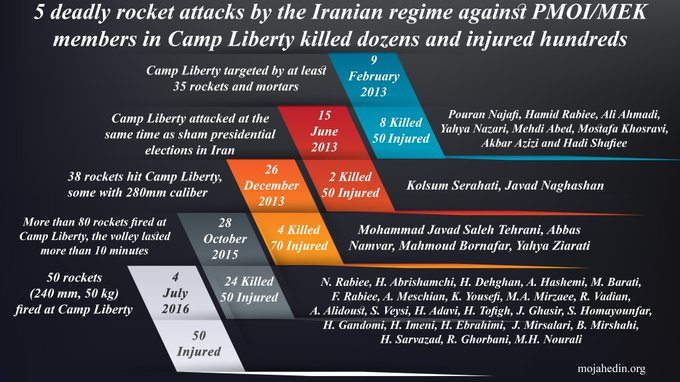 No one accepted responsibility for the mentioned attack against the PMOI/MEK. However, MEK’s sources inside Iran discovered that Ali Khamenei assigned the regime’s Supreme National Security Council (SNSC) to conduct the attack in January 2013. Afterward, Abdolreza Shahlai, a top IRGC Quds Force official, orchestrated the attack by implementing the regime’s local mercenaries in Iraq including Kata’ib Hezbollah.

According to reports obtained by the PMOI/MEK, the 40 attackers and the rockets, mortars, and other equipment they used in the February 9 attack were ferried to the camp by vehicles belonging to the Iraqi police and the Iraqi interior ministry. Launching a barrage of missiles on a protected location such as Baghdad International Airport was impossible without the cooperation of the Iraqi government and security forces. The attack also showed the scale of the Iranian regime’s influence on the governmental apparatuses in Iraq, though they had made this country as a vassal of the mullahs.

On February 14, the NCRI held a remembrance ceremony where President-elect Mrs. Maryam Rajavi called on the U.S. administration and the European States to pressure the Iraqi government to respect the human rights of the residents of Camp Liberty and deter further attacks. She highlighted the obligation of the international community, particularly the three signatories of the transferring accord, to protect the residents’ lives and raised alarms over potential further attacks, warning that “a similar attack can take place any day and any minute.”

The mullahs’ deadly attack on Camp Liberty also prompted reactions inside Iran and abroad. On February 14, 2013, political prisoners in Ward 350 of Tehran’s notorious Evin Prison “condemned the missile attack against Camp Liberty that to this day has left seven [later the death toll reached nine] residents killed, and dozens wounded.” Political prisoners commemorated the PMOI martyrs and expressed their sympathy and condolences to their families.

Also, PMOI/MEK supporters held ceremonies in homage to the martyrs of the attack. They also installed the photos of the martyrs on walls in several cities including Tehran.

On February 18, 2013, four U.S. congressmen attended a conference at a Paris hotel and severely condemned the attack on Camp Liberty. Rep. Dana Rohrabacher, a California Republican, accused Iraq of breaking its promise to help protect the 3,100 refugees who lived in the former American military base known as Camp Liberty.

“Put everybody on notice — and I think I speak for our whole delegation. … If there is another attack on these helpless refugees by the government, obviously cleared by the government of Iraq, we will move in the United States Congress and put forward a resolution not only just condemning the act but declaring Prime Minister Maliki and his government state sponsors of terrorism,” Rohrabacher issued a warning to the government of then-Iraqi PM Nouri al-Maliki.

Absent relief efforts, the flood-stricken people of Sistan and Baluchestan continue to suffer