January 25, 2020—The government of Albania shut down a school in Tirana that was being funded and operated by the Iranian regime on Thursday. The Saadi School was shuttered shortly after Tirana expelled two Iranian diplomats for violating their diplomatic status in the country and taking part in spying and terrorist activities against the Iranian opposition. The decision was made and declared by the Albanian Ministry of Education.

“Funded by Iran, this school has been operating in the capital for several years, but the decision for its activity’s termination was made on January 8, 2020, and enters into force immediately,” Albanian Daily News website wrote on Thursday. ADN also reported that the school has been instructed to refund its students and cover their transfer expenses.

The two diplomats declared personae non-gratae were Mohammad Ali Arz Peimanemati and Seyed Ahmad Hosseini Alast. Both of them were also heads of the Saadi Shirazi Foundation, which finances the school that was closed by the government.

Albanian government sources told the media that the two diplomats are being expelled for activities against members of the People’s Mojahedin Organization of Iran (PMOI/MEK) in Albania. According to Albanian authorities, cultural attaché Seyed Ahmed Hosseini Alast had held senior positions in the Iranian regime’s Revolutionary Guards, and Mohamed Peimanemati was a member of Iran’s Ministry of Intelligence and Security (MOIS) and was responsible for several terrorist acts carried out in European Union countries.

Other information indicates that the two were associated with Qassem Soleiman, the Iranian regime’s terror master who was killed in a drone raid on January 3. The two diplomats were escorted to the Tirana airport under strict security provisions earlier this week, where they boarded a flight to leave the country.

This is the second time Albania has declared Iranian diplomats working and living in the country personae non-gratae.

In December 2018, Iran’s Ambassador to Albania and another embassy diplomat were expelled from the country after being suspected of being involved in “activities that threaten security in the country”.

Albania’s firm stance in front of the Iranian regime has set an example of dealing with the terrorist threat of the mullahs and has earned the country respect from politicians across the world.

The U.S. government welcomed the expulsion of the regime’s ambassador from Albania and commended to the country’s government for standing up against the Iranian regime’s terrorist activities.

We commend the Government of #Albania for taking action against #Iran’s regime for its terrorist plotting on Albanian soil, threatening European security. Letter from President Donald Trump thanking the Government of Albania: https://bit.ly/2T2Ev1v 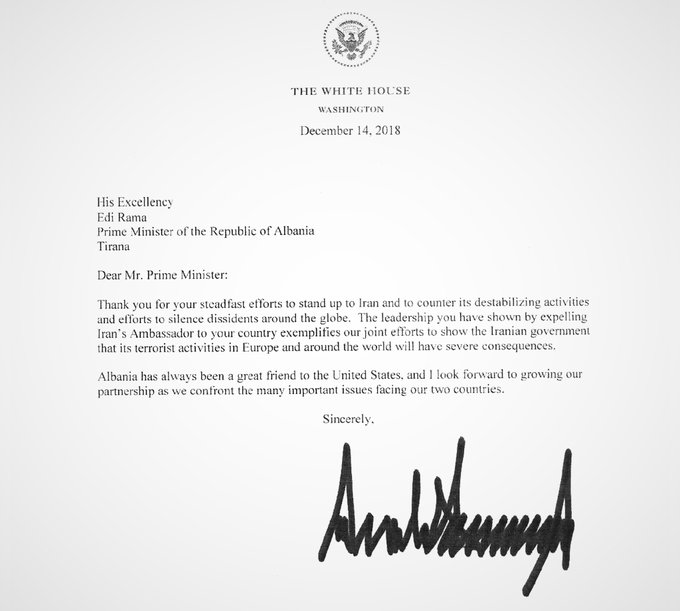 “The Iranian regime continues to use its diplomatic facilities in Europe and elsewhere as cover to plot terrorist attacks, as well as to threaten and spy on Iranians living abroad,” she said.

In October 2019, the Albanian police disclosed information about an Iranian regime terrorist network and revealed the identities of four suspects linked to the Quds Force. The terror agents were tasked with gathering information about the MEK and prepare terrorist acts against the Iranian opposition.

“Highly Secretive Iranian Rebels Are Holed Up in Albania. They Gave Us a Tour”- Fake News on MEK