Iran, January 11, 2020—Shortly after Iranian regime authorities admitted to having shot down a Ukrainian passenger plane on January 8, protests erupted in Tehran.

Isfahan has joined the protests. Videos obtained from inside Iran show protesters at Isfahan’s Sioseh Pol, chanting, “So many years of crime, death to the velayat [the rule of the mullahs].” The protesters in Isfahan were also chanting, “I will kill he who killed my brother,” a reference to the regime’s crimes in the recent uprising, where its security forces killed over 1,500 protesters.

The protesters are also rejecting the regime’s claims that the United States is to be blamed for the country’s problems. “Our enemy is right here. They lie in saying it’s America!” the crowd is heard chanting.

Protests have also spread to Hamedan, another major Iranian city. A demonstration rally was held in front of the Hamedan University. The protesters are chanting, “The incompetent IRGC is a disgrace for the nation!”

January 11 – Hamedan, western #Iran
Students of Hamedan University chanting:
“The incompetent IRGC is a disgrace for the nation!”

The IRGC is the Islamic Revolutionary Guards Corps.#IranProtests 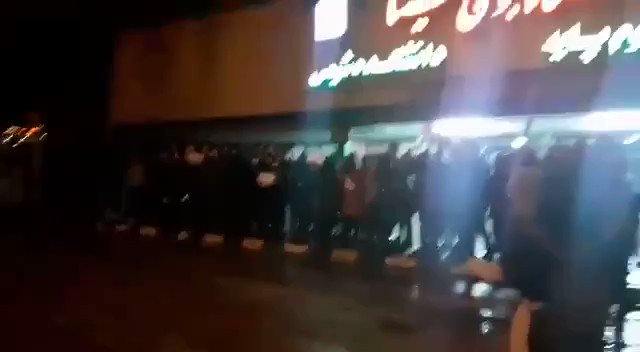 At Sharif University, protesters were chanting “Death to Khamenei,” calling for an end to the rule of the mullahs. At the same location, the protesters also chanted, “[Qasem] Soleimani is a murderer, and so is his leader.”

Qasem Soleimani was the head of the Revolutionary Guards Quds Force, the regime’s foreign terrorist arm. The U.S. killed Soleimani in a drone strike last week. While the regime tried to portray the murderous Soleimani as a national hero, the protesters showed that the people of Iran have other thoughts about the criminal and his leader.

Footage obtained from Tehran shows security forces opening fire on protesters at Amir Kabir University. At least one protester has been hurt in the incident, video shows.

Other videos obtained from the scene show protesters challenging security forces and not backing down from their demands. In response to the repressive forces of the regime, the protesters were chanting, “Fight and we will fight back” and “I will kill he who killed my brother.”

The regime’s widespread efforts to prevent the protests from spreading have been futile.

Videos from early afternoon show a large group of people, who had gathered in front of Amir Kabir University in sympathy and solidarity with the families of the victims of the incident. Another gathering was held by groups of special arts students of Tehran University. A similar rally took place at Sharif University.

The aircraft crashed shortly after it was shot by the regime’s anti-aircraft units.

The aircraft crashed shortly after it was shot by the regime’s anti-aircraft units.

Soon the gathering turned into an anti-regime rally as the demonstrators started chanting slogans against the regime’s crimes. At Sharif University, protesters were chanting, “Commander in chief, resign!” In the Iranian regime, the commander in chief is none other than the supreme leader Ali Khamenei, the unelected authority who has the final say on all matters of state. The protesters also directly called for Khamenei to resign from power, chanting, “Khamenei have some shame, let go of power!”

In front of the Amir Kabir University, where some of the most intense protests took place, the demonstrators were chanting, “People didn’t die for us to praise the murderous leader,” another reference to Khamenei.

The protesters were also chanting, “So many years of crimes. Down with the velayat [mullahs’ regime].” The slogans of the protesters reflected those chanted in November by nationwide protesters who called for the overthrow of the regime in its entirety.

The regime dispatched security forces to control the situation and intimidate the protesters. But the protesters stood their ground and chanted “Shame on you! Shame on you!” The security motorcade eventually left the scene without being able to scatter the crowd. While the security forces were passing by, the crowd was chanting, “Death to the liars,” a reference to regime officials who initially rejected claims of having shot down the airplane.

The protesters in Amir Kabir directly targeted the supreme leader, chanting “Death to dictator” and “Our leader is our shame.”

The protesters also reminded the regime that they have not forgotten its crimes in during the November 2019 uprising. The protesters were chanting, “1,500 of our people were killed in November.” Shortly after protests erupted over a sudden hike in the prices of gasoline, Iranian security forces killed more than 1,500 people across Iran by directly opening fire on demonstrators and shooting them in the head and chest.

A state-run media outlet admitted to the protests taking place in Tehran. The official IRNA new agency reported, “Hundreds of people in Tehran gathered in front of Amir Kabir University in Hafez street in response to the belated declaration of the cause of an airplane crash that resulted in the death of 147 of our compatriots.

“A large crowd has gathered at the crossroads of Taleghani and Hafez towards Enghelab Square, and their number is increasing every moment.”